Dylan – “It was never explained how sitting was a crime.”

Hi, My name is Dylan.

On Saturday June 26, I went to demonstrate in opposition to the G20 with some friends. We were protesting the neo-liberal policies that tend to be put in place when multi-national meetings between leading economies occur. We felt that neo-liberal polices benefit the policy makers themselves and their constituents while disenfranchising the less wealthy. We felt the G20 meetings have been an insult to the democratic process, further divorcing public policy from public control; widening the gap between public policy and public opinion. The G20 gives the message that only the highly privileged elite should have influence in political decision making.

After sometime we learned that people had regrouped at Queen’s Park, so we tried to make our way there. Unfortunately, about 100 police were blocking our entrance into the designated legal protest area. It was confusing that we were not allowed into the area that was designated for demonstrating. When sitting near the police, one officer threatened a teenager with a club for telling him he dropped something. Later, a fellow police officer picked it up for him and he was thanked. While we were sitting, the police arbitrarily started moving forward, and became very hostile. They began to shout, and claimed that if we don’t move, we will be arrested. I think more people were worried about being trampled, because the police were coming in quickly. Several horses also made a presence, making the situation appear chaotic.

One of our friends was at Queens Park, and we wanted to reach him to make sure he was okay. Unfortunately, at every angle, the police had made a massive wall, usually about 100 or so police making sure no one could enter the legal designated protest zone. We eventually settled to sit down with about 50 people or more near one of the police walls. The demonstrators were speaking about unity and love for the planet. It was very friendly and harmless.

The police seemed to think otherwise, and began to move towards us, without provocation. They began violently shouting “move!” “move!” and claiming that we will be arrested if we don’t. It was baffling that we could be arrested when the police were not even allowing us to demonstrate in the legal zone. Not to mention, it was never explained how sitting was a crime. The police became more aggressive, and I wanted to show the absurdity of the police requests. I wanted to show I would not be intimidated, so I chose to crawl away, instead of walk. If they would not allow legal demonstration then there was no reason I should be obedient I felt. By crawling, I was being civilly disobedient. Showcasing the undemocratic nature of a state which criminalizes sitting demonstrators. I was not complying to an authority which protects those who maintain a system of world inequality.

My statement lasted only a short period. Before long I heard the rampant footsteps of 100 or more police officers running in my direction, and firing rubber bullets. The sound and gunshots were terrifying, and I ran as fast I could along with the crowd. Some people did not make it away safely, and were swallowed up by the large group of police officers. When I found my friends, I was relieved, and they were glad I was not captured or trampled by the officers. They had believed I was, and were concerned for my safety. 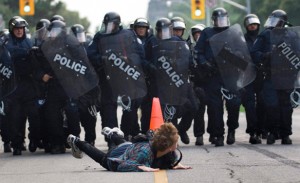 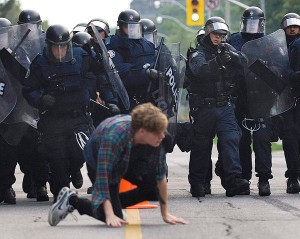