Seamus Wolfe – “Five officers grabbed me, hit me repeatedly with batons and fists, threw me to the concrete, crushed knees into my cheek bone, back and thighs, dragged me on the pavement and put handcuffs on me”.

At approximately 5:30 pm on June 26, 2010, a group of students I was with decided that after all the confusion of the all the actions in downtown Toronto in protest of the G8/G20, the best place to go was Queen’s Park, since it was the officially sanctioned protest zone by the Toronto Police.

We walked north up University Street to find the entire street blocked by police a block down from Queen’s Park. When asking the Police on this line if we could get through to Queen’s Park, they refused to give any answers and then without warning, used their bicycles to violently push us and others gathered there back about 40 meters. Finally, several of the Police told us that if we wanted to go to Queen’s Park we were free to do so by going around and entering from the North side. We decided to follow those instructions, walking west, through the University of Toronto and joined the several hundred of individuals who were on the north part of Queen’s Park lawn.

When we arrived we joined many people who were standing on the path running parallel to the Parliament buildings about 50 meters from the buildings. I watch in horror as every couple of minutes, anyone who was not standing in a group, was picked out by a group of Police that would rush through the Police line and violently take them to the ground and drag them back. I repeatedly asked the Police why they were arresting people and under what jurisdiction did they have to remove us from Queen’s Park, since I was under the understanding this was the sanctioned protest zone. I received no response until the Police line rushed forward screaming “Move! Move!”, hitting me and other people with their shields and batons. They were pushing people to the north-west of Queen’s Park lawn, so I turned my back to the Police line and started walking in that direction. I did not run, since I thought that this could only provoke further Police violence. Police would later tell me they had used loudspeakers to tell people to disperce – at no time did any officer tell me to leave the lawn. All they would say is “move” – nothing more.

I was walking calmly off Queen’s Park lawn, with both hands in the air in peace signs when about five officers grabbed me, hit me repeatedly with batons and fists, threw me to the concrete, crushed knees into my cheek bone, back and thighs, dragged me on the pavement and put handcuffs on me.

I was then transferred to officers who were not in riot gear, who demanded I tell them why I had come to trash their city and with which group I was with. When I responded that I wouldn’t answer any questions until I talked to a lawyer, they said that would only make it harder on myself and painfully tightened the handcuffs to cut off the circulation in my hands. When they were about 20 meters from the University Street intersection area, where I could see other individuals detained lying on the ground, one of the officers very forcefully squished the palm of my hand toward my forearm and squeezed painfully underneath my upper arm, making me double over in pain, while he screamed “Stop resisting arrest asshole! Stop resisting arrest!” repeatedly.

They then pushed me to lay face-first on the concrete that was covered in horse manure, while taunting me about protesting in general and attempting to have me answer a series of questions, other than my name, birth date, address and emergency contact, which I had done without hesitation. After every question I refused to answer, they would twist my arm or put a knee in my back and ask me forcefully if I was sure I didn’t want to answer the question.

Once I was put on the bus, feet and hands shackled, I was sent to the detention centre. Until some point at the beginning of being at the detainment centre, I had never been told what I was being charged with, nor read my rights. At that time I was told I was being charged with “obstruction of justice”; yet several hours later when on my one phone call to a lawyer, I was told by a guard I was also being charged with “unlawful assembly”. In the detention centre, I was forced to have a strip-search, had all my clothing other than a t-shirt and shorts taken from me, forced to sleep on the incredibly cold concrete floor, and moved every one to six hours. By the time I was transferred to the court house jail at 9 am Sunday morning – approximately 15 hours after being arrested – I had been given only two Dixie cups of water and one small white bun with a thin slice of processed cheese. During the entire time almost every single police guard would taunt everyone in every cell, whether they had said anything to them or not. Many of the comments were extremely homophobic, very sexist, quite violent and always demeaning. The comments were made by almost every single police guard I encountered.

At the court house jail, these comments continued, although there was finally a water fountain in my cell. By the time I had had a bail hearing and was released, shortly before 10 pm Sunday night, I had only received one more of the “sandwiches”.

I have kept this report short and did not include what I saw and heard from other detainees, but would be prepared and willing to elaborate if need be. 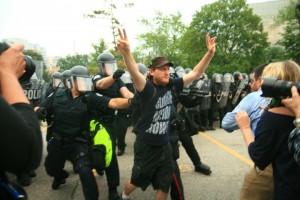 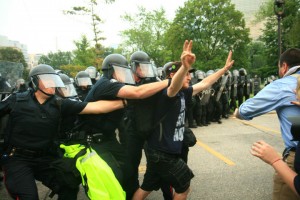 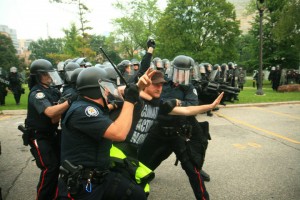 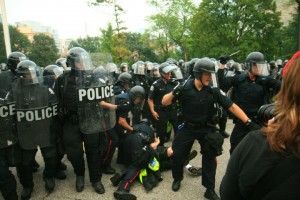