Stephen – “‘You cocksucker Black Bloc douchebags’, yelled an officer directly into my ear, ‘You think you are so fucking tough? How are you now without your faggot friends?'” 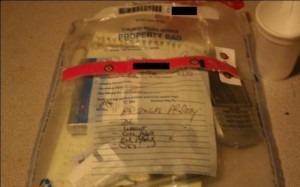 A Political Prisoner, With No Political Affiliation
Personal Memories from the G20 Detention Center

After a morning walk on a whim around the walled in downtown corridor, my interest in Journalism had returned like a blazing wild fire. G20 fever had hit Toronto, and What I had seen was beyond anything in Canada that I had ever witnessed. The military helicopters and rooftop snipers against the backdrop of gray sky and drizzle was almost surreal, reminiscent of “Librium”, the fictional Dystopian city that serves as the backdrop of the 2002 film “Equillibrium”. Behind the fences were hundreds of marked police officers, riot helmets available for quick deployment at their side, and hands on their side arms. On the other side however, was desolation. Ten minutes could go by without seeing another soul, and those encountered were only there with the same curiosity as myself. With experiences in hand, I proceeded to go about my daily business, unaware of what awaited me.

Like many, I was curious to see first hand the demonstrations for the 2010 G20 summit which took place Saturday evening. In a gross show of power, I and close to one thousand other people were arrested and detained for circumstance pertaining to the protests. Special regulations passed by the government of Ontario in secret allowed godlike powers to law enforcement, which served to perpetuate the abuse of power which lead to this violation of human rights.

While walking down the intersection of University Avenue and Queen Street West, coffee in hand and notepad in my pocket I eagerly made my way towards the epicenter of what has been dubbed “The Battle of Toronto”. My goal was to witness, without any bias, the pandemonium which encircled the meeting grounds of the demonstrations. Prior to my journey into the downtown core I had been working on a buddy’s apartment and was not aware of the violent protests beyond a few police cars on fire, and tear gas being deployed. I was also unaware of the presence of the “Anarchists”, known to the media as “The Black Bloc” (though technically this is a tactic, and not an organized group).
Before I could even make my way anywhere near the intersection of Queen and Spadina, I witnessed a group of heavy metal music fans being searched by the police, the only reason (which after reading reports I can now speculate that the only reason was because they were wearing the trademark colour of the movement, black). In support, I threw “the horns” (the rock on symbol) and continued on my way, not knowing the repercussions of this menial hand gesture.

In a futile attempt to plead my case, I asked the young officer who was now holding me if I could make a statement. “Shut the fuck up”, was all I was told. After multiple tries to be heard, and repeated threats from Police, I was finally placed into the rear of a police cruiser, and left alone for the better part of a half hour. Finally, I was escorted into a transport, the first of two before arriving at my destination and personal hell : A former movie studio that was converted into The G20 Detention Center at Pape Eastern Avenue.

Completely disoriented, with no clue where I had been taken I was ushered out of the transport with 2 other men. The bright fluorescent lights only served to aggravate the headache I had developed from my head smashing the pavement. Air conditioning was set at what I assume was the maximum level, and wearing only pants and a sleeveless shirt this was exceptionally uncomfortable. I had my handcuffs removed, and switched to a plastic zip tie, which was like everything else uncomfortably tightened, without knowing I would spend the next 24 hours in these restraints. Without so much as a telephone call or an explanation of my rights, I was lead into a holding cell, which at final count contained 39 other males. These 39 males were not the anarchists, they were not terrorists, and they certainly were not criminals. Most were in the wrong place at the wrong time, and all most definitely did not deserve to be in there.

The cell itself was of a crude construction : A 10 foot by 30 foot steel cage, bolted to the ground containing one 6 foot bench, and a single portable toilet. The ground was made of solid concrete and the remnants of green screen paint stained the ground and the clothing of my imprisoned comarades. This is where we would spend the next 12 hours, taking shifts between the bench, standing, and dividing up floor space, some attempting to sleep, others pressing the cage, asking for their rights. I kept quiet at first, but eventually joined in on the frantic chants, shouts, and cage rattling in an attempt to be heard and given our most basic of all needs : water. 3 hours later we were given a 100ml Styrofoam Dixie cup, with one serving of water. In the 24 hours I personally spent in the detention center, I was given 6 of these, 2 containing some sort of bastardization of tang, and 4 “meals” that were all the same : A small hamburger bun containing butter and a single slice of processed cheese.

After 12 hours of severe discomfort on concrete, and a rather enjoyable game of condom volleyball, our numbers were finally divided, and roughly 15 of us were moved to another cell that was almost empty. We had finally been given space, but we still had no contact with the outside world, legal counsel, and save for maybe 3 or 4 special constables, a decent officer who would show compassion or concern for any of our inquiries. We were told that we would be processed between 6-10 hours, which was a blatant lie, and given exaggerations that they were dealing with 2000 people, so things would take longer. Even worse were threats from one officer in particular, that once certain members of the cell were in the parking lot, he was going to beat the shit out of them.

After what we could guess was about15 hours, we saw the force mobilize in the processing area, with pained looks of panic and terror on their faces, and a thin veil of smoke seeped into the jail. Word got around that there were protesters out front and they were demanding our release, so being sleep deprived, hungry and thirsty, we began to contemplate escape. We had even figured a way out, but with doubt and logic kicking in, we decided against the idea after all, escaping custody was a far cry from Breach of the Peace. Again, we patiently waited for our processing, almost everyone looking forward to a cigarette and to see their loved ones.Finally, the Special Constable and Court Services people had arrived, slowly moving out the belligerent, tired, famished and parched men of Cells OL03 and OL06. It finally came down to just one left in the cell : myself.

I asked repeatedly where my property was, and why I had not been processed, but nobody payed attention. Any communication I could make did not pay attention to my plight, only saying “we’ll look into it when we have time”, meanwhile people who I had watched being brought in almost 20 hours after me had been processed ahead of me. 2 hours of solitude I waited, pleading for water, a phone call, and for some fucking compassion. Eventually it got to the point where I began spitting, kicking the hell out of the cage, and giving rude gestures to the camera, and screaming about my rights as a human being. I had finally snapped. It was only then, when a plain-clothed detective came to my cell.

This is when my luck had turned around. The detective made 2 trips after getting my prisoner number and name, and had returned within 10 minutes with both good news and bad news. My property and all my processing paper work had been lost, but I would be out within a half hour. I was let go on a “catch and release” form, and after about 10 minutes of processing with real police, not their special lackeys, I was finally given my freedom and they had located my property. I had found the only exceptional law enforcement officials in the building, sadly, too late to do anything for my sanity.

I stepped out on to queen street at 12:58am, 27 and a half hours after my original
arrest to a dwindled crowd of protesters and frantically tore open my property. I reached in and pulled out the 2 things I was thinking of the entire time in lock up, those being my cell phone to let my girlfriend know I was alive and ok, and my cigarettes. Oh goddamn did I ever need a cigarette every moment of my incarceration. I walked right into the crowd, lit my cigarette, and with a quirky smile I looked into a camera and gave the only statement I felt fitting to the moment: “FREEDOM!”.

It is now Monday, and I’m finally at home perched in my favourite chair watching City Pulse’s coverage of the current protest, with the comforts of a tea on the table, and a cigarette in hand, a comfort I did not have during my wrongful detention.
“A billion dollars, wasted, wasted”, echoes a massive audience, strong and vocal at Queen’s Park. I cannot help but feel that I should be there with the mass, my people, but a condition of my Breach of Peace sheet state that I may not participate in any protest related to the G20, otherwise I will be charged with the criminal charge, Obstruction of Peace. I guess it’s all for the best, every time I pass a police car now I cringe as I’m reminded of the beatings, mistreatment and blatant abuse of authority I saw this weekend.

I had witnessed the death of Canada’s beautiful democracy, the birth of a completely legally sanctioned police state, and for the first time in my life I looked upon the Canadian flag with shame. This weekend, only 4 days from the anniversary of the Nation’s birth, I was not proud to be a Canadian, which is a disgusting feeling to me. I love this country, our freedoms, our rights but at this present time, I can’t help but resent it. The worst part is that the government is congratulating law enforcement for a job well done. Granted, when things got violent, they did their duty to the best of their abilities, but after that, it was completely out of hand. So many innocents wrongly imprisoned without their rights. The worst part is that for the most part, they did not catch those who had committed the real crimes.

Welcome to Canada 2.0 everyone, where freedom can be snatched out from underneath without a moments notice. Some say we’re lucky to be in the situation we are in, it could always get worse, just look at many of the third world countries. The only difference, is that we are NOT a third world country. We are NOT a fascist state. We are NOT to be subjected to this sort of abuse and authoritative behaviors because we live in Canada, NOT anywhere else.

Here is the permanent link to this story: http://ironmiller.tumblr.com/post/748079786/im-not-a-number-im-a-free-man-oh-wait

2 Responses to Stephen – “‘You cocksucker Black Bloc douchebags’, yelled an officer directly into my ear, ‘You think you are so fucking tough? How are you now without your faggot friends?'”