Terra Dafoe – “In a matter of seconds, without warning, we were trapped. Our questions were met with blank stares, our panic with more pushing, complaints with arrest” 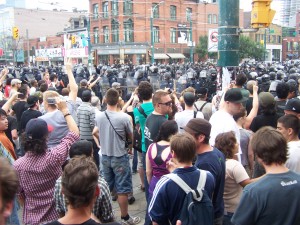 On Sunday June 27, 2010 myself Terra Dafoe, my boyfriend Lucius Dechausay, and my good friend decided to take a walk around the downtown streets. Through our walks we encountered a lot of the damage from the vandals of the previous day, but the protests taking place on Sunday were entirely peaceful. There were children around, signs denouncing violence and more often than not the echo of “peaceful protest” was heard throughout the downtown core. Around 5pm we decided we had our fill of the G20, parted ways with our friend and started walking towards King West and Bathurst, or in other words, home. Upon arriving on Queen West, just before the intersection of Queen and Spadina, Lucius and I noticed that there were a great number of street cars stopped, some still with passengers inside. As we made our way past these cars there were still patrons on patio’s drinking beer and having dinner. Aside from the cops every few feet or so, armed with rubber bullet guns and full police gear, things were peaceful.

As we approached the intersection just before 6pm it became apparent that a small and peaceful protest had organized there. There were a number of protesters sitting on the ground chanting for others to join them in seated, peaceful protest. This did not last long as within moments police were surrounding those standing in the middle of the intersection shouting “move move” and herding us to the West side of the intersection. Although police reports throughout the media state that they gave us three warnings to clear out of the intersection or we were going to be arrested, for those of us that were there we know this a blatant lie. There were no warnings, no communication, and we were not given any opportunity to leave or you can be sure we would have. We were a couple of blocks from home and completely unable to get there. Furthermore the West and South exits were already blocked when we arrived on scene (which is the direction we were headed) and a line of riot police was already closing in on the North and East exits preventing anyone from leaving.

In a matter of seconds, without warning, we were trapped. We stood peacefully with the other detainees for 30 or so minutes without any communication from the police. Our questions were met with blank stares, our panic with more pushing, complaints with arrest, and as spectators on roofs were replaced with cops with rubber bullet guns, a definite state of panic and anxiety swept through the crowd. We knew something was terribly wrong.

At this point it began to rain and thunderstorm. Like most of those around us, we were in shorts and t-shirts so it didn’t take long for the pellets of rain to drench most of us to the core. A handful of people, including some elderly huddled underneath shelter next to the McDonalds. Police promptly ordered them to stand in the rain instead. We waited for hours in the cold intense rain; rain so hard the nearby DVP flooded. Some police joked about being cold too, even though they were in full riot gear, and told us to ‘stop pretending,’ as we shook violently from the cold. At least one man right beside Lucius collapsed and was promptly dragged out of the crowd by police. We were offered nothing in the way of comforting words and one officer told a group of people to use their body heat to keep each other warm, telling a distasteful joke about who stays warmer, a naked farmer or one in full clothes. Some officers who interacted with us, also used this time to belittle us and many others, at times telling us things like “the people in here don’t care about you, the second this is all over you’ll all be strangers again, they’re just using you for your umbrella.” We also watched them tell one young couple and the others around them that they had clothes in their backpacks and to put them on. These people were like ourselves, caught in the crossfire, and with no supplies to provide us with any comfort throughout our detention. Comments such as these were completely unnecessary and used by the police solely to humiliate those of us detained. A few people asked others being detained if they had food to spare. We had been there a long time, with no determined time to be released. Many had been weakened by the fear, the intense weather conditions and were now also hungry.

This continued until around 9pm, most of it with little to no communication from police. It wasn’t until that time and with a new rotation of police that we were informed that ‘we were all protesters and would be arrested and charged with Breach of the Peace one by one.’ We were told that we ‘were given the chance to leave, chose not to and would be processed and taken to the detention centres.’ Lucius and I were there from the very beginning. We were never given the opportunity to leave, police never spoke to us and we, like most of the crowd, were definitely not protesters. Numerous ‘greyhound style’ buses started to arrive, presumably to transport us to the detention center. We were told by one officer that we were all “going to be allowed onto the buses to be processed there as some people were starting to develop hypothermia,” said pointing directly at us, afterwards to be transported to the detention center. We were again informed that we were going to be there for a quite a while and to just relax. At this point we had been forced to stand shoulder to shoulder in pouring rain for over 3 hours straight during a thunderstorm. This was psychological warfare, unjust and inhumane.

We continued to wait for about another 30 minutes or so, still freezing cold, still in the rain, when finally an announcement came that we could move to the buses. As we turned around we noticed that some people had not gone to the buses yet instead had left the scene through a street on the West side. We hurried to that side of the street and that was the end of our horror. We never looked back. To this day we’re not sure if we were actually released, if we escaped, or how it all came to end, as was the theme of most of the evening, our captors failed to communicate any of this information. In fact our captors failed us all Sunday evening in every way a police officer can fail those whom they are supposed to protect. Our safety was always in jeopardy, our rights suspended and disregarded, our health ignored, and our concerns and fears trivialized.

What happened at Queen and Spadina was a serious human rights violation, a withholding of hundreds of individuals’ civil liberties, a disgrace to the city of Toronto and the entire police force, and an act of complete militarization by the Conservative government. This crowd was not filed with violent protesters. It was comprised of compliant citizens who did not once retaliate against police despite their continual efforts to provoke and humiliate us. For those of us forced to live through it it was an absolute nightmare. One that we will all be reliving long after the G20 is gone.

1 Response to Terra Dafoe – “In a matter of seconds, without warning, we were trapped. Our questions were met with blank stares, our panic with more pushing, complaints with arrest”